Cozy mysteries take the stage in the new issue of MYSTERY, CRIME, AND MAYHEM: Crime in the Countryside.

Inside, you’ll find ten entertaining tales of crime in country settings. I’m thrilled that my short story “Crete Robbers” joins these fine pieces by so many of my favorite authors. 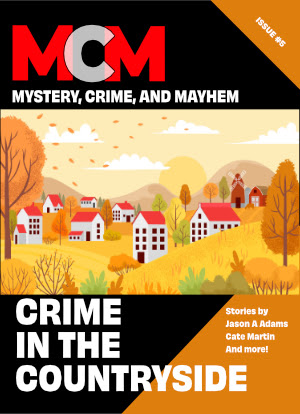 Click on the cover above or follow this universal link to your favorite online retailer to get your copy. Also available in paperback from Amazon.

March Madness 2020 is a month away. Dawna’s off-duty from her temp assignment in Seattle. And on board Amtrak’s Coast Starlight, headed for Eugene. Tonight, she’ll cheer for the Lady Ducks’ basketball team, ranked number three in the nation.

Fate trumps that plan when her train stops in Portland.

The number one criminal on the FBI’s most-wanted list boards her double-decker coach and Dawna pivots from hoops fan to full-on FBI fugitive chaser.

Like the original airplane hijacker, the copycat extorted a huge ransom and escaped by parachuting into a mountain wilderness.

But now, Dawna has him in her sights.

She swiftly figures out how to arrest and remove him from the train at the next stop. But in her quick telcon with her boss in Seattle, he nixes her arrest plan.

Instead, an interagency team of cops and commandos will confront the fugitive in Eugene with overwhelming force.

All Dawna has to do is keep her eye on the perp until the arrest team takes over.

She doesn’t argue. She’ll do as she’s told.

Has the veteran FBI agent finally learned to follow orders?

Originally published in Mystery, Crime, and Mayhem quarterly magazine, “Lonesome Whistle: A Dawna Shepherd Short Story” is now available as a standalone ebook. You’ll want to ride along as Dawna applies her uniquely ornery crime-solving approach to the case.

To find an online retailer with a copy for you, click on the cover above or follows this universal link to a digital store.

Wannabe moms at risk of their pregnancies ending too early will do almost anything to stop preterm labor. FBI Special Agent Dawna Shepherd won’t allow a shady medical equipment manufacturer to profit from their dedication.

In this month’s ebook release, FBI Special Agent Dawna Shepherd works undercover as a new sales rep for the manufacturer.

The company’s premier infusion pump tested safe for home care of asthma patients. Not for women with histories of preterm labor. Though anecdotal evidence suggests it may help them.

Dawna has more anecdotes. About wannabe moms whose hearts are damaged forever by the infusions.

She fakes a passion for selling. Closes in on the smooth-talker who gulls unwitting staff into marketing the device illegally. A profit-driven practice that fails to warn pregnant woman they’re risking their own lives.

Dawna has only one more training session to catch the company’s wily marketing czar. But her cover is wearing thin.

Can she outsmart her prime suspect?

Or should she try to out-dumb him?

You’ll find the answer in a suspenseful tale about moms, big pharma, and the FBI, all happening under wintry sunshine in Dallas, Texas.

To buy your copy, follow this universal link to your favorite online bookseller.