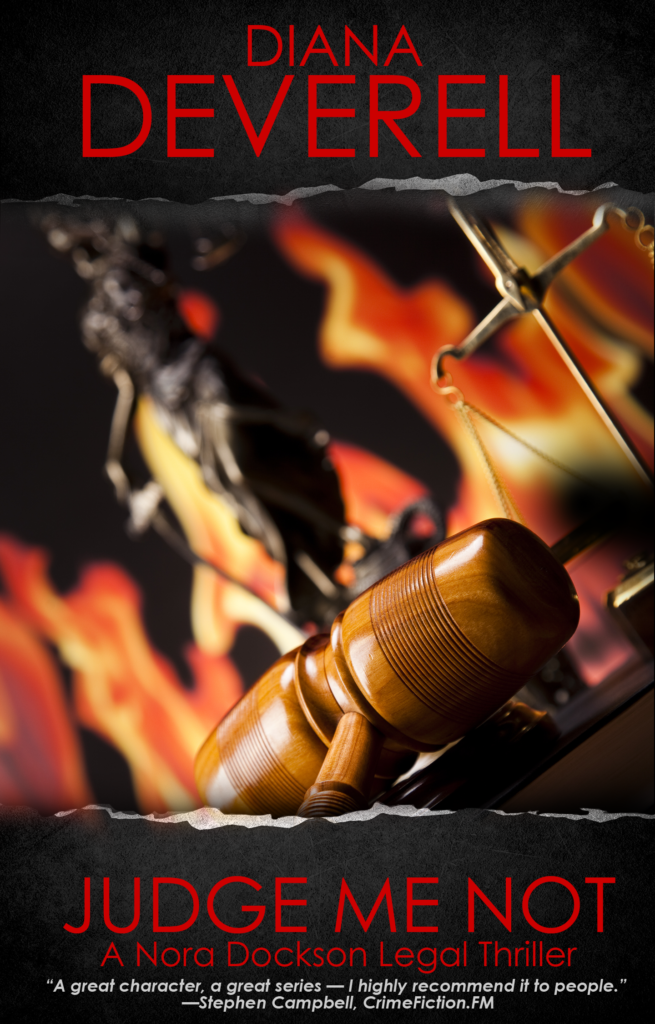 Trying to make sense of what happened, Nora ends up at the murky junction where arson myths and bad-mother stereotypes collide with modern science. Piecing together Silvia’s story, Nora rediscovers more of her own.

Fans of John Grisham and Lisa Scottoline will be captivated by this engrossing legal thriller. Diana Deverell illuminates the problem facing vulnerable women accused of crimes that cannot be overturned by DNA evidence.

Silvia sniffed. “A minute after the fire marshal got there, he was talking arson.

Nora blinked. “Before the structure cooled? He eyeballed the blaze and concluded arson?”

Silvia nodded. “He pointed out the thick, black smoke. Mentioned the rapid spread of the fire. Said the arsonist had closed the doors and windows so nobody passing would see what was going on inside.”

“One cop came to me carrying my gas can,” Silvia said. “He asked if I’d seen it before. I said it was mine. Immediately, he wanted permission to check my car.”

She gave a sour laugh. “I thought he wanted to see if the arsonist had damaged my old Ford. But he was hoping he’d find my most treasured belongings hidden in the trunk.”

Silvia swallowed. “The other cop asked me how much the trailer was insured for. I said I had no idea what insurance the owner had. Right away, the cop asked if I had renter’s insurance. I didn’t. I couldn’t afford insurance.”

Silvia shook her head. “I’ve read everything about arson I can get my hands on. The cops were trying to find a reason why I’d set the fire.”
“You didn’t realize that when they were questioning you?” Nora asked.

“No, I thought they wanted to help me deal with the tragedy. You know, get my paperwork in order so I could collect my insurance money.”

Shrugging, Silvia added, “I thought that was what cops did. Helped people.”

“Did you get any medical help?” Nora asked.

“The EMT spent some time checking me over for injuries and looking for symptoms of shock. The cops kept interrupting with questions. After an hour, they said I could leave in the ambulance. I spent the rest of the morning in the hospital under sedation.”

She sighed. “At ten o’clock that night, the cops came to my friend’s house. I was asleep on her couch. They woke me up and hauled me to the sheriff’s office.”

Silvia found a tissue in her pocket. Blew her nose.

“I lost my shoes in the fire. I was barefoot. Groggy from the sleeping pills. Heartbroken because my little girl was dead.”

She paused, her eyes shiny with unshed tears.

“They insisted I go with them. They weren’t polite, either. That’s when I got it. They weren’t out looking for whoever set the fire. They’d decided I’d done it.”