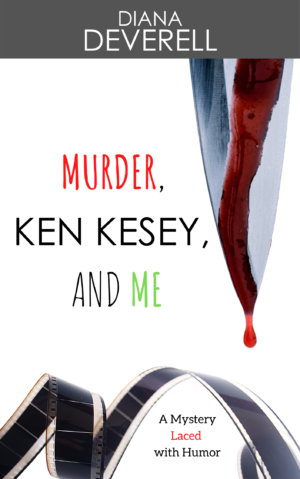 In this comic mystery, an indie company comes to Oregon to film Acid Test: The Life of Ken Kesey. Eugene location scout Estrella “Star” Stevens stumbles over a dead body and into the crushing embrace of the FBI. She’s forced to join their risky investigation of gangland boss and titty bar owner Oscar Quarry. Narrowly escaping death, she’s suddenly living her own movie. Will she be a star? Or the next corpse?

I followed fellow Oregonian Ken Kesey to Stanford where my creative writing class was NOT the one he visited while on the lam. Enough right there to explain my fascination with the man and his brilliant novels.

I reached the site at ten forty-five. A battered stepvan was parked in the drive, fifty feet from the shack. I rumbled slowly by it. No one sat in the driver’s seat. I parked a yard in front of the vehicle and climbed off the motorcycle. The clouds had turned darker and the willow branches shivered in the cooling breeze.

A lanky dude came out of the shack. He and trotted toward me. The guy was my age and had on a dark blue oil-stained coverall reminding me of a garage mechanic. He stopped when he reached the van and looked at me inquiringly. “You the lady wants to make a movie in the cabin?”

“I am.” I peered at the stitching on his coverall but read only the name “Harvey.”

“Right.” He leaned into the van and pulled out a clipboard. “Sign my work order and I’ll get started.” He sounded as though he was reciting from a script. He grinned as he passed me the paperwork.

I got a whiff of stale sweat and a glimpse of big gaps between his remaining teeth. Which appeared no cleaner than his vehicle.

Harvey inspired no confidence in me.

I glanced at the work order, scrawled my name next to a red X, and handed it back.

He glanced down at my signature and back at me as he brushed stringy hair off his forehead. The back of his hand was greasy, his little finger ended at the last joint, and all his nails were black.

Man, I was tired of the disbelieving reaction to my hokey name.

“Right. Star. I’m the one needs the toxicity test. I got a movie company coming this afternoon to shoot some scenes.”

I waved a hand toward the shack. “Are you finished?”

“No. I was just checking to see what tests I need to run.” Harvey’s words came out faster and smoother, as though he’d returned to his script.

“I’ll go pinpoint the spots which most concern us.”

He stared at me dumbly for ten seconds and shrugged. “Whatever,” he said, turning back to the van.

I hurried toward the shack. Traffic yesterday had crushed the ground cover around the building, giving the area a bombed-out appearance.

Under the darkening sky, the place looked forlorn and spooky. Willow leaves still gave off the strongest scent but today something noxious lurked beneath.

Had the corpse left permanent traces?

The bad odor was stronger when I reached the porch steps. Strong enough to name.

I hadn’t smelled the stink yesterday.

A loose end of yellow and black crime scene tape fluttered like a butterfly wing in a gentle breeze. Harvey had broken it going in.

As I reached for the doorknob, I heard an engine start. Twisting to look behind me, I saw the van backing down the drive. Damn, what was Harvey doing?

I turned the knob and pushed open the door.
A shiny one gallon can sat beside the wood stove. The can was the familiar forest green color favored by a leading manufacturer of camping products. The orange warning label pictured a portable camp stove.

I stumbled back from the open door. Whirling, I leaped from the porch and hit the ground running.
The shack exploded with sudden and intense noise, like a thunderclap when the lightning’s directly overhead.

The tin roof shrieked as the burst shredded it.