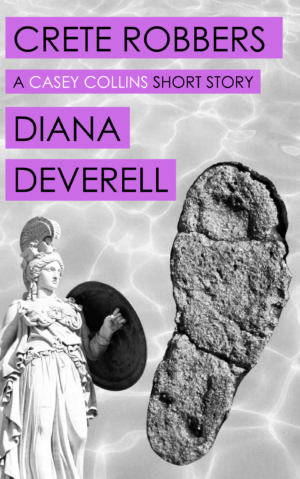 Her bargain vacation should be a perfect way to escape February’s chilly darkness, soak up Mediterranean sunshine, and study Minoan history and culture.

But she runs into two problems. First, she finds that none of the other tour group members will converse in her native language. And they don’t understand her broken version of theirs.

Luckily, she doesn’t have to endure two weeks of the silent treatment. Her tour guide Vassilis is fluent in English. And also happy to share his passionate and patriotic love of all things Greek.

Her second problem is that today he also shares the unwelcome news that a precious Cretan artifact has disappeared from a local dig site.
Vassilis believes the thief is a member of Casey’s group. A phony tourist ideally placed to smuggle the item out of Greece when the tour ends.

If Vassilis tries to identify a suspect he can name to the police, the thief may destroy the artifact to avoid arrest. If Vassilis names an innocent person, the tour operator will fire him for poor customer service.

Vassilis sees no way to stop yet another priceless Greek cultural treasure disappearing into a private foreign collection.
His heart is breaking.

And Casey’s is breaking for him.

His hands are tied.

Can she identify the thief without being noticed?

A long shot, but for Vassilis’s sake, she has to try.